Snow-white houses, blue domes and bright little chapels. Barren hills, bizarre rocks, sandy niches and deep blue as far as the eye can see – this is the backdrop that surrounds you on a sailing trip in the island world of the Greek Cyclades. Around 50 islands are part of this archipelago, which are arranged in a circle – in the Kyklos – around the once sacred island of Delos. And on each island there are new postcard-like motifs: on Santorini, for example, the reddish-shimmering volcano crater and on Delos with the most impressive excavations of Greek antiquity. Those who sail from island to island in the Cyclades quickly realize that they are traveling in one of the most beautiful areas in the world. And they know well about the fact that a trip in the South Aegean can be rough. Because here sometimes the Meltemi has the say...

Santorini – this Cycladic island is said to be the most beautiful of all Greek islands. It is the destination of honeymooners, dreamers and romantics. About 3500 years ago, it was born out of a volcano, since then the little island as a dark tuff rock protrudes vertically and up to 300 meters high out of the sea. At the very top of the caldera, the crater rim, lie the island towns: for example, the capital of Santorini, Thira, whose houses cling to the steep crater rim, all whitewashed and with light blue shutters.

Delos is the smallest of all Cyclades islands. Today, only a few archaeologists and museum keepers live there, but in the past, Delos was densely populated: around 30,000 people were said to have lived there for a time. At that time, Delos was a place of worship, because this is where Goddess Letho gave birth to her son Apollon. Even today you can discover magnificent things on the island: the Temple of Apollo, 2000-year-old statues and the Terrace of the Lions with huge marble lions.

Naxos is the largest and greenest island in the Cyclades enchanted with its varied landscape paired with ancient ruins and monuments from various eras. Naxos marble was already one of the most important marbles in ancient times and until today you can observe the mining and further processing of the "white gold" in numerous places. Whether experiencing cultural history, going on hikes or simply enjoying the beach and the incredible play of colors of the water, from light turquoise tones to deep blue nuances – everyone gets their money's worth on Naxos.

The easternmost island of the CycladesAmorgos served in 1987 as a film set for the immersive drama "Le Grand Bleu" (in English "The Big Blue") by Luc Besson. Visiting the approximately 126 km² large island, it is easy to understand that Amorgos with its cliffs, which give a fantastic view, the olive groves and the varied rock landscape was a really good choice of the director. Picturesque is also the most famous attraction of the island – the rock monastery Panagia Chozoviotissa – which sticks about 300 m above the sea in the rocks and was founded in the 9th century.

Art lovers will get their money's worth on the island of Andros. Many artists settled here during the 19th century – some of them because of the impressive and inspiring landscape and others who sought peace and quiet. Andros is the most hilly Cycladic island. Far away from mass tourism and hotel complexes, Andros is surrounded by numerous mountain ranges and green valleys with a variety of flora and fauna. 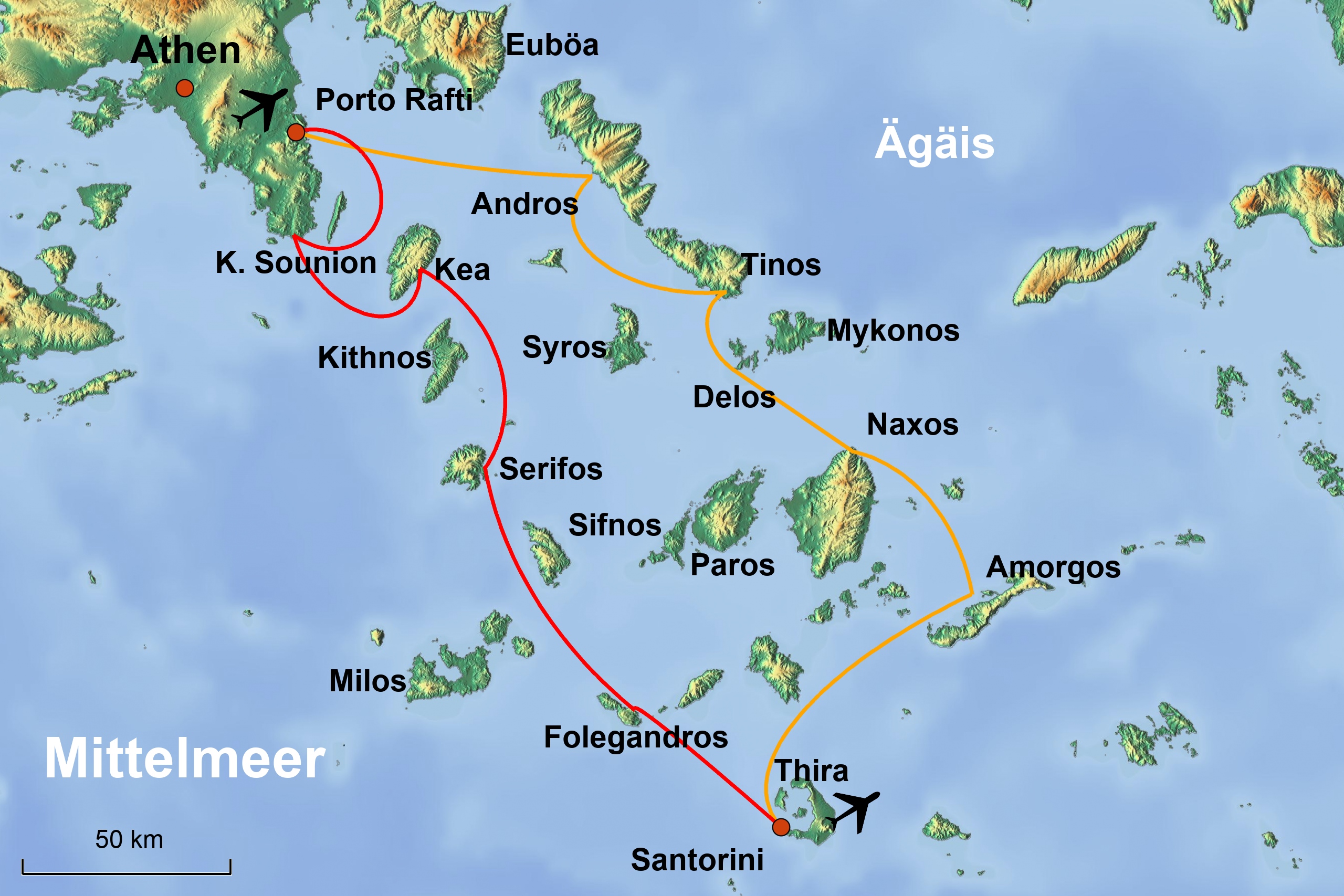